Five questions with amazing queer South Asians from around the world

Five questions with the founding editor of Gaylaxy magazine, Sukhdeep Singh, a man of courage and conviction 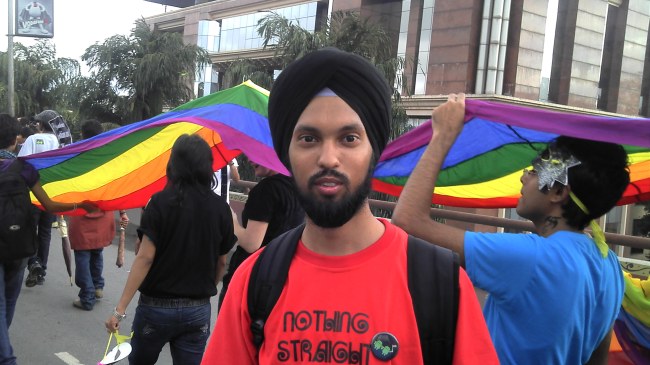 I grew up in Kolkata, in a Sikh family. My parents have always taught me that all humans are equal, and that serving humanity is serving God! My parents are a bit religious, but I am not; and they have never forced religion upon me as such. I have grown up in a liberal atmosphere; but like most Indian households, sexuality is something that does not get discussed. I do not remember feeling “guilty” for harbouring same-sex desire while growing up. Sometimes I would pray to God to give me strength to deal with the situation, or sought a way to tell my parents. But as I got to understand my sexuality more, such fears also vanished.

How did you come out?

Coming out … well, I have been coming out since 2009, and can say it has happened twice- once to friends, and once to my mother. My first coming out happened when I was in college. I had written a coming out post on my blog, which was followed by only a few close friends. But after a few months, someone got hold of the link and I was publically outed. Thankfully, all my friends were very supportive and stood by me. Although I did receive a few reactions like ‘How can you be gay? When did you turn gay?’ It was largely a positive reaction from others and I was soon leading an open life in my college.

To my mother I came out last year, and it was difficult to explain to her. I knew she wouldn’t understand what gay means, so I told her I wouldn’t be marrying. When she asked why, I tried explaining her that I was attracted to boys instead of girls. At first she acted as if she didn’t hear anything, as if the conversation never happened. Later when I again sat down with her and told her about it, she questioned me how was this possible, how will I have kids, who will I lead my life with? She told I could marry a girl of my own choice in 2-3 years and then started crying. Our relationship hasn’t been affected and we haven’t had a direct conversation on this topic after that. But she doesn’t approve of me going to gay pride marches or other gay events.

What has been your inspiration in life?

My inspiration is my parents, who did such a wonderful job of bringing us up despite the hardships they had to face. They always allowed me to grow and work on my interests. The teachers of my school have also inspired me a lot.

What has been some of your greatest achievements?

I have had a fairly difficult childhood since our family’s economic condition wasn’t good. But I was a studious student who stood first in my class. With the help of my school Principal, I was successful in getting through to one of India’s best engineering colleges. It was while studying in college that I launched Gaylaxy magazine in 2010, India’s largest English language LGBT magazine. Over the years, I have been able to sustain it along with my job (I work as a Software Engineer). We launched India’s first and only Hindi LGBT magazine too on 1st January, 2014; and will soon be launching a mobile app in a few days.

What is your message to the world?

Treat everyone equally, with love and dignity. Our only concern should be welfare of humans. Do not harbor hatred within yourself for anyone. Question every single thing in the world, and if the answers do not satisfy you, work towards change. The ability to “unlearn” is also important. We must unlearn the prejudices, sexism that we might have learnt while growing up. Lastly, for queer youth, I will say, do not be too bogged down with sexuality. Focus on your study and career and when you grow up, you will find the courage and way to lead your life.